Members are now able to add their System Dynamics-related events to the Society calendar
for greater engagement and visibility. Not a member? Join here.

Submit an event | Edit your events

The Dark Side of Projects: Delays, Disruption, and Disputes 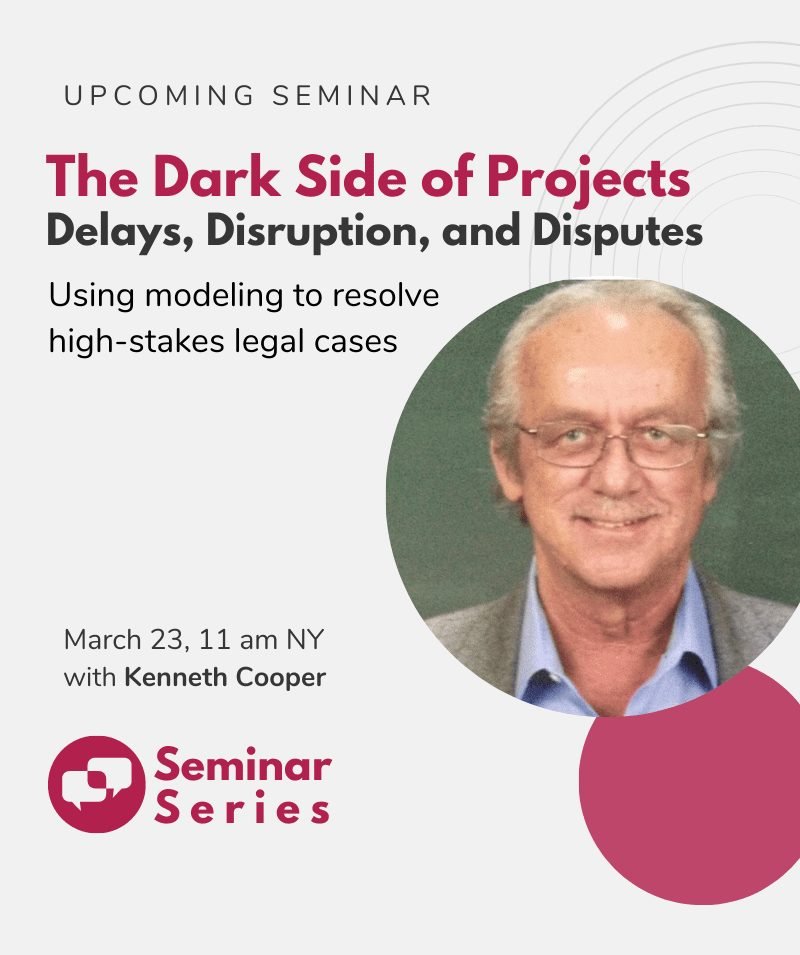 The Dark Side of Projects: Delays, Disruption, and Disputes.

The original author of the project Rework Cycle model and a pioneer of its application to high-stakes legal disputes will present materials and lessons drawn from dozens of successful dispute cases. “The Dark Side of Projects” examines the phenomena of project cost overruns, contractor-customer disputes, and “disruption”, the most contentious (and often largest) part of those disputes.

The “disruption” impacts that dominate so many contract disputes historically have been notoriously difficult to quantify and present persuasively to fact-finders (courts, boards, arbitrators). This in turn leads to significant under-recovery of the real damages. In the course of leading large dispute cases worth billions of dollars, the presenter has seen more equitable resolutions secured, with financial benefits to clients that have been quite large relative to the cost.

For modelers, we introduce the basics of conducting System Dynamics based analyses for project dispute resolution; this is one of the most commercially successful areas of practice for modelers. For business (company and project) leaders who have been (or might yet become) involved in a dispute over project cost responsibility—as well as the attorneys who advise them—we introduce how to employ model-based analyses to more effectively analyze, explain, and recover disruption cost impacts.

Ken Cooper led the largest consulting practice focused on system dynamics for over twenty years and founded two more companies applying System Dynamics. He has won several best-in-world awards, such as the System Dynamics Society’s Applications Award, and was named an Edelman Laureate (twice) for his work in dispute resolution; The Franz Edelman Award (from the Institute for Operations Research and Management Science) recognizes the best practice from among all forms of management science in the world. The first Edelman Laureate awarded Ken’s work on the seminal “Ingalls Shipbuilding case”, the first application of System Dynamics to a major project, and the first System Dynamics use for a large project dispute. This was the first of many successful SD-based dispute analyses Ken has led for executives of major defense and commercial contractors.

Cooper has led hundreds of applications of system dynamics modeling and led the renowned commercial system dynamics consulting practice at MIT spinoff Pugh-Roberts Associates for over 20 years. In 2011 Ken became the only two-time Edelman Laureate for his work, which began with his pioneering work in project modeling and dispute resolution and continued over four decades. The Franz Edelman Award from the Institute for Operations Research and Management Science (INFORMS) recognizes the best and highest-impact applications of all management science in the world. In 2009 the System Dynamics Society also unanimously selected his work for their Applications Award, recognizing the impact of his successful project modeling at Fluor Corporation with this global award for best application of system dynamics.

Ken was President of Pugh-Roberts Associates, then the largest consulting firm in the field, and Managing Partner of PA Consulting. There he pioneered the use of system dynamics in large-scale project management, and in particular the resolution of very large contractual disputes.  Ken has led the modeling of hundreds of projects and programs, including dozens of naval ships in the US and UK, the B2 stealth bomber, the F18 E/F fighter, the AMRAAM missile, the Peace Shield air defense system, the Cross-Channel Tunnel, power plants, refineries, and many other mega-projects. In all, Ken has led the modeling of over one-quarter trillion dollars of projects and programs.

Ken’s work on business applications of system dynamics has been published extensively and recognized with numerous global awards. Ken was named by the System Dynamics Society as their first Vice President, Professional Practice. He is now semi-retired, working on select consulting cases.

Ken graduated from MIT, where he studied System Dynamics and received his Master’s degree from Boston University.