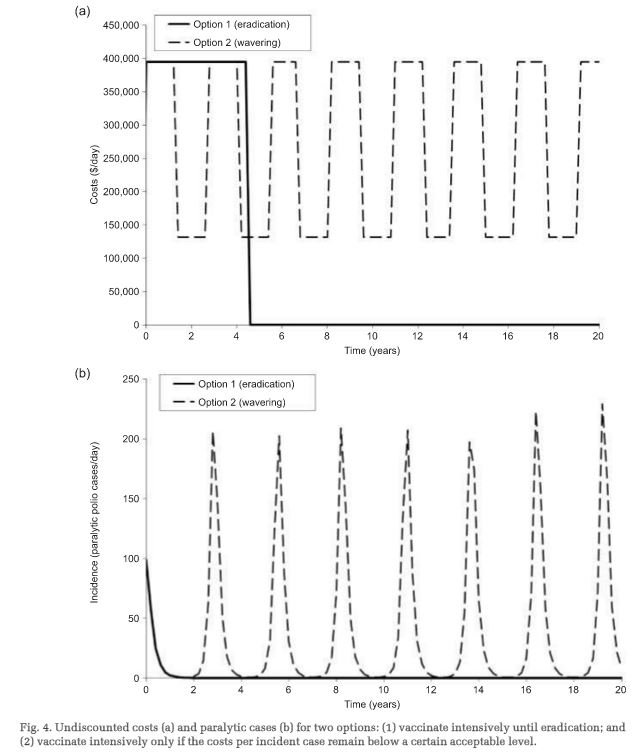 Following successful eradication of smallpox and impressive progress in the elimination of polio in the Americas, in 1988 the World Health Assembly committed to global eradication of wild polioviruses by the year 2000. By 2000, the Global Polio Eradication Initiative (GPEI) had significantly reduced the global circulation of wild polioviruses. However, in 2002–3, faced with insufficient funding to continue intense vaccination everywhere, the GPEI focused its vaccination efforts. At the time, wild polioviruses continued to circulate in six countries, but many other countries remained vulnerable to importation. Political and logistical challenges led to outbreaks and exportations, and between 2004 and 2006 wild polioviruses appeared again in previously polio-free African and Asian countries.

Toward the end of 2005, debate began about abandoning the goal of eradication. How could the world continue to justify the significant use of resources (both financial and human) on polio, particularly with the number of cases globally already so low and so many other disease control and health services programs in need of resources? In 2006 a prominent editorial questioned whether polio eradication is “realistic” and expressed concern that “international assistance for polio could have negative effects on other public health efforts”. The editorial suggested that “the time has come for the global strategy for polio to be shifted from ‘eradication’ to ‘effective control’”.

Given our then current work on assessing the risks, costs, and benefits of post-eradication policies we could use many of the components we previously developed to model a shift from eradication to control. Notably, our dynamic disease outbreak model for polio allowed us to estimate potential numbers of cases. Our analysis came at a critical time. In February 2007, the WHO Director-General, Dr Margaret Chan, convened an urgent stakeholder consultation to discuss the option of switching to control. We had the opportunity to present the preliminary results of this work at that meeting.

Following publication of the paper, an article about the paper published in the same journal as the editorial mentioned above noted that our analysis provided “a nail in the coffin for the idea that there is a cheap and painless way out”. Since then, efforts have continued to focus on finding the resources needed to complete eradication and on dealing with the other complex challenges that remain.

National and global health leaders and financial supporters have recommitted to completing eradication, and this has led to several hundreds of millions of dollars of resources.